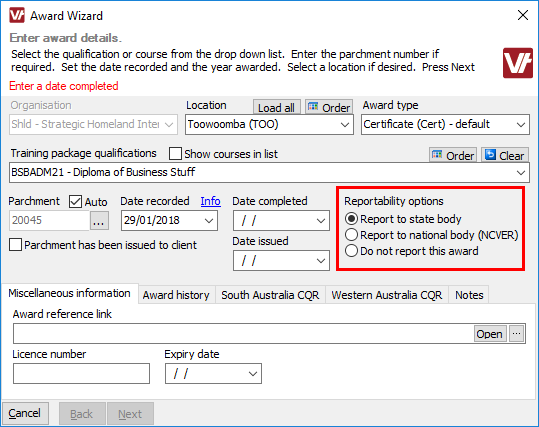 Statements of Attainment (Statement awards in VETtrak) need to be reported in the NAT130 if the Statement relates to the completion of a locally recognised course or skill set that is is government funded.

Statements of Attainment for subjects (units of competency, accredited units and modules) are essentially transcripts. These can be issued at the completion of non-recognised short courses for a small selection of units, or during the progression of a student to a full qualification in a recognised course. The completion records for these unit-only enrolments is derived from the NAT120 file where a competent-level result has been recorded, indicating the unit was completed successfully.

Because of this, these ‘transcript’ type Statements do not need to be reported in the NAT130 file.

This means that unless the Statement relates to the completion of a government funded, locally recognised course or skill set, it should be set to ‘Not Reportable’ in the award wizard.